Sir Nigel Knowles, the Sheffield City Region Mayor’s Advisor on International Trade and Investment, headed up a highly successful international trade visit to Pune and Mumbai in India between 25 and 30 November with an ambition to open trading opportunities and job creation between the SCR and India.

Ten delegates from a number of organisations, including Performance Engineered Solutions (PES) and the University of Sheffield’s Advanced Manufacturing Research Centre (AMRC) joined Sir Nigel on the five-day trade mission, which was organised by the Sheffield City Region in association with the UK Indian Business Council (UKIBC) as part of strengthening relationships between the two trading regions.

Speaking after the visit, Sir Nigel said: “The Indian economy is more influential, faster growing and offers more opportunities to exporters than ever before.  This trade mission allowed us to showcase the Sheffield City Region’s expertise in advanced manufacturing and has created an environment in which our region’s businesses can collaborate even more closely with Indian companies and academic institutions.”

The trade mission saw the delegation visiting a host of advanced manufacturing and academic organisations, including the Automotive Research Authority of India, the Indian Institute of Technology (ITT-Bombay) and Pune College of Engineering, as well as meeting with the HM Trade Commissioner to India and representatives from the Maharashtra Industrial Development Corporation.  Sir Nigel and the SCR delegates also visited Bharat Forge, which has more than 50 years of manufacturing excellence.

The visit highlighted the Sheffield City Region’s strengths in advanced manufacturing, lightweighting, and engineering, as well as it being a hub of world class research facilities and two leading universities.

The delegation visited an area of India which boasts similar expertise in these sectors, particularly around composites, e-mobility and advanced technology.

Professor Mike Maddock, Managing Director of Performance Engineered Solutions (PES) Ltd, a world-leading engineering company working in areas such as aerospace, defence and energy, said: “India is an increasingly important trading partner for the UK, and especially for businesses in the Sheffield City Region. Our region and India are bound by our joint expertise in areas such as advanced manufacturing and engineering and the relationships forged on this trade mission will result in significant opportunities, collaborations, and investments across the region. The opportunities are mutual, and India deserves more of our collective time and resources as it becomes an important source of inward investment opportunities and a high potential export market.”

Stuart Dawson, Chief Technology Officer at the University of Sheffield’s AMRC, said: “The AMRC has longstanding partnerships with Indian companies especially in the deployment of novel castings technologies.. Our work in Lucknow and Kanpur, for instance, is central to the region’s ambition of creating an advanced manufacturing corridor, a very similar concept to that which is rapidly evolving in the Sheffield City Region in the world’s first Advanced Manufacturing Innovation District.

“This visit is an opportunity to strengthen our ties with India by developing R&D partnerships that benefit both the UK and India. It also puts the Sheffield City Region on the map as the come-to-place for high value manufacturing investors in search of world-leading R&D support to keep that crucial competitive edge."

Sir Nigel added: “We see huge potential in working with India, as we share similar ambitions, which makes us ideal partners. We are looking to build long term partnerships with Indian businesses in specialist areas, including advanced manufacturing and engineering, material science, digital-led manufacturing and health and well-being.  Our vision is that digital technology and innovation will drive economic growth and prosperity.”

India will have the third biggest economy in the world by 2030.and is predicted to grow at an average rate of 5.9% per annum until 2050, making it the most rapidly expanding of all G20 countries.

India has been an under-exploited export market for the SCR. Whilst the EU accounts for 55% of all goods and services from the SCR, India and China combined accounted for only 6% of the region’s total trade. 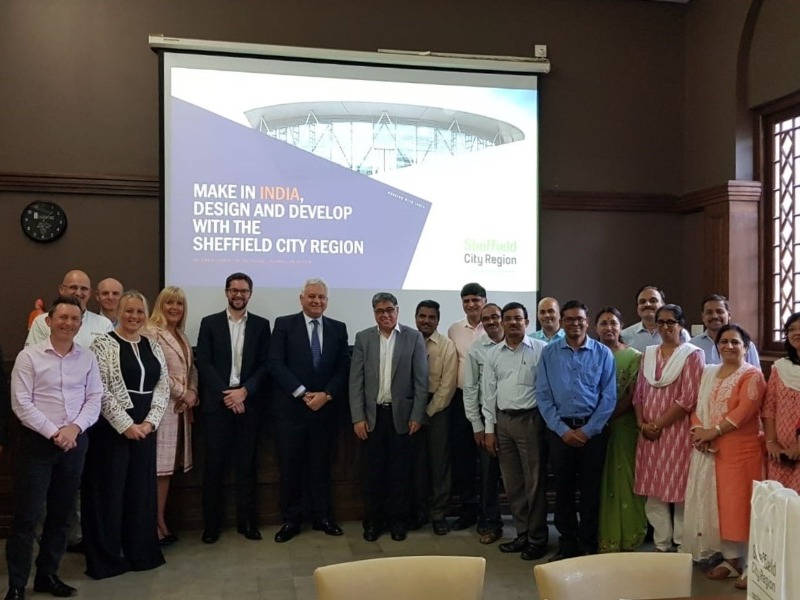